Home > Sensory Processing > Is it Sensory or Is it Behavior?

*Please note, this episode was recorded at a previous date, the masterclass mentioned in this episode is no longer live

OK folks, today we have a big episode for you. It’s really the backbone of my entire platform and why I do what I do. If I were running for president, this would be my campaign tag line.

Okay, someone pointed out to me recently that that sentence technically isn’t grammatically correct, BUT, it’s in the context of the debate that sounds like, “Is it sensory or is it behavior?”

If you don’t know what I’m talking about, I’ll give you some examples.

“Is it sensory, or is it behavior?”

When I have my 1:1 coaching calls with parents, parents will share a certain scenario or behavior that keeps coming up for their child, and it’s usually one that involves some form of aggression or crying. So, like “my 4 year old keeps hitting his baby sister every time he passes by her.” , or “My 6 year old has huge meltdowns everyday before school.” , or “My 3 year old keeps running away in his preschool class”.

After I let them explain more of the scenario or the challenge they’re working through, they usually ask some form of “is it sensory or is it behavior?” And basically, what they’re asking is, “is my child hitting/screaming/melting down due to a sensory trigger, or are they doing it ‘on purpose’” and that “on purpose” part is usually what they’re inferring to as the “behavior”.

But let’s break it down.

If you look in the dictionary, the definition of behavior, you’ll find: the way in which an animal or person acts in response to a particular situation or stimulus.

The way in which a person acts, in response to a situation or stimulus.

So, if the situation or the stimulus happens to be Christmas music playing while decorating the Christmas tree, and your 3 year old responds to this by being hyperactive and hitting their sibling- there is a chance this is a sensory trigger. But it’s still considered a “behavior”.

In that sense, the behavior is communicating that the child is dysregulated from too much competing auditory and maybe visual input from bright lights, etc.

Now, maybe that same 3 year old, the next day also hits their sibling again, this time in the middle of playing legos. They’re playing legos and maybe the sibling takes a piece they needed. The 3 year old is otherwise regulated at this time of the day, so you figure out that it’s because they’re feeling upset and angry that their sibling took their toy. The behavior is the hitting. The reason why they hit is because there is potentially a skill they’re lacking, such as language to communicate their anger, or lack of impulse control, or lack of emotional regulation in general.

Just to drive the point home and really make it clear, I want to share with you some real examples of clients I’ve worked with in the past and how their behavior was directly tied to a sensory trigger.

One time I was working with a 4 year old boy in the clinic, he was tactile defensive, and was extremely sensitive to imposed touch- which is when the touch wasn’t in his control (including things like hugs, taps on the shoulder, etc).

I was helping him move from one room to the other and as he was walking in front of me, I kind of placed my hand on the back of his shoulder to kind of guide him out the room, and he immediately turned around and scratched me. He looked so shocked, like he didn’t know what came over him.

For this same client, I went to his school to observe him because he was having a lot of challenges in social situations with peers. I observed a very quick interaction that could have easily been misinterpreted by the teachers. He was sitting in a group of peers playing with marbles or cars (something that rolled), and someone’s car/ball rolled under him and they reached out to grab it (so their hand grazed his leg).

Well, he immediately hit/swatted at the child and that child cried and told the teacher what happened. I was able to help sort of translate what happened, but that’s how quickly it could happen and of course the other children don’t understand why it happened, my client himself barely understands.

It’s a true fight or flight response. But it was a behavior, and it was driven by a sensory trigger.

Another example you can actually watch on my instagram.

So Liliana is tactile defensive and hates getting her hands sticky or messy. We’ve gone through waves of it, and it’s actually getting worse again recently. But anyway, this was our second time pumpkin carving and as you know… those pumpkin guts are not the easiest to touch, I also don’t love touching it myself. Before the video starts, she was using a long handled black spoon to mix a bowl of pumpkin guts, you know those black slotted spoons you use for like a pasta sauce.

Then the video starts recording and it’s when I ask her to switch spoons with me. I was trying to get her to use a regular sized silver spoon. My reasoning for this is, I wanted to get her closer to touching the pumpkin slime by giving her a shorter spoon. You can visually see the dysregulation in her eyes and her body language, and then she refuses in a very aggressive way then grabs the spoon out of my hand.

Now if I didn’t understand her and her regulation, I might have thought that was rude or someone might feel inclined to stop her and make her give it back or “ask nicely”.

But I knew that wasn’t her.

Her behavior (grabbing the spoon angrily) was driven by a sensory trigger. And notice, she hadn’t even come into contact with that sensory trigger yet, she hadn’t touched the pumpkin guts, but it was in anticipation of it, or being surrounded by the challenge of it that already made her dysregulated.

OK I got a couple more examples for you.

A 4 year old was having an exceptionally hard time focusing, paying attention and just listening to instructions in the class. We (her parents and I) were kind of stumped, because she didn’t seem to have executive functioning challenges (related to attention and focus) in other environments as much as she did at school.

She was primarily coming in to the clinic for clothing sensitivities but this challenge at school had come up within 3 months of working with her.

Long story short, we figured out that the school uniform she had to wear (which was something we were working on in the clinic) was so uncomfortable for her, it was just a constant sensory trigger for her all day.

And when your brain is focused on processing or protecting you from a sensory trigger (which in neurotypical people, the brain does this automatically), but when your brain spends energy doing that during the school day, it can be extremely distracting and it can make it hard for you to focus and pay attention to the teacher.

Once we worked on regulation strategies and asked the school for clothing accommodations, we noticed a huge improvement.

Okay and for my last example, it’s one I like to share because it shows you how complex a sensory trigger can be. It’s not always as clear as like, the toilet flushes, your child melts down, so it’s triggered by the toilet flushing.

Sometimes, the sensory trigger can be an accumulation of sensory input throughout the day or days before. And this includes routine changes or changes in schedules because that offers a lot new or unexpected sensory inputs. So my favorite is example is the after school meltdown.

On my daughter’s first week of school (after being on lock down for over a year), I picked her up from school and handed her her water bottle when I buckled her in the carseat.

Well, she didn’t like the water bottle I chose to bring her from home. Then once she got over that, she was mad at the fact that it wasn’t filled up to the right line. She was screaming and threw it on the ground. The meltdown continued all throughout the car ride home and even at home that day.

When I saw her school pictures that day (her teachers upload them to an app), I saw her finger painting, I saw her sitting at the edge of the lunch table by herself wearing headphones, and I saw pictures of her sitting next to her classmates during circle time while clapping at the end of a book.

So this told me… wow that was a busy day, FULL of sounds, sights, feelings, smells…. All of the things that really truly filled her sensory cup, and she had a great day at school, no behaviors or meltdowns, but the last drop in her sensory cup was seeing a water bottle she didn’t quite want. So the behavior was screaming and throwing the bottle, but it was driven by the sensory overload from the day she had at school.

Sometimes our kids are communicating that they are dysregulated and we need to help them find more moments of regulation. 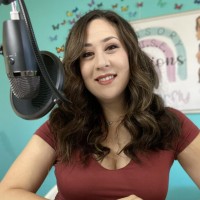